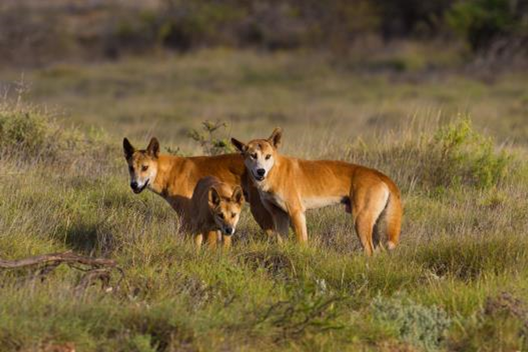 Generally speaking, Dingoes can live in a wide range of habitats found on the Australian mainland. Their preference is woodland and grassland areas that extend to the edge of forests.

Dingos are a dog-like wolf. They have a long muzzle, erect ears and strong claws. They usually have a ginger coat and most have white markings on their feet, tail tip and chest. Their bushy tail is 25–37 cm long.

• Dingos rarely bark. They tend to howl, particularly at night in an effort to attract pack members or to ward off intruders. Other forms of communication include scent-rubbing, defecating and urinating on objects such as grass tussocks to mark territorial boundaries.

• Diet: Dingos are carnivores and prey on a variety of animals, ranging in size from insects to rodents, lizards to geese, wallabies and kangaroos to buffalos. Packs of dingos have greater success hunting larger animals like kangaroos whereas individuals are better at hunting smaller prey like rabbits.

• Dingoes will breed once a year between March and June. The gestation period is approximately nine weeks (similar to domestic dogs) with the resultant litter producing usually between four and six pups.

• Dingos can interbreed with other breeds of domestic dogs.

• Threats: Dingos are under threat from interbreeding with domestic dogs. There are very few pure-bred dingos left in Australia. They may also be persecuted by farmers as they are sometimes seen as a threat to livestock or accidentally poisoned when they eat baits left for wild dogs.